Throughout the year, you could always find a student in class with a book from The Hunger Games series in their hands. One of the main themes of the story is a group coming together to defeat evil and restore good in the world. Because of this, we wanted to try to find a way to do good for those around us. It just so happened that we found the perfect way to combine The Hunger Games with a way to help the community. We teamed up with our gym teacher, Mrs. Lynch and the “Stop Hunger Games” were born!

After much brainstorming, we determined that field day would be a perfect opportunity to combine one of our favorite book series and the opportunity to help those who are less fortunate. We decided that we would collect canned and boxed goods in the weeks leading up to field day and that all the events that day would relate to the books or hunger in some way.

The whole idea turned out to be a great success! Not only were we able to collect and donate three huge boxes of food but we had such an amazing time at field day despite the not so great weather. We participated in events such as the bow & mallow, in which students had to try to hit targets using a bow that shot out marshmallows. We had a javelin toss which simulated activities that were done at the training center in the book. We even had a pizza box relay race where students had to carry huge stacks of pizza boxes without dropping them! 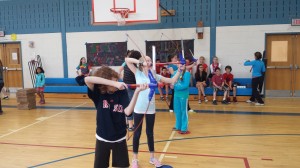 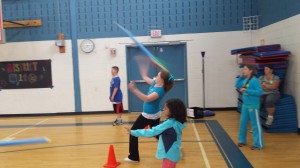 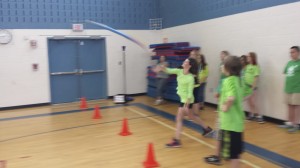 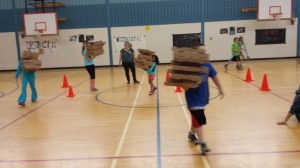 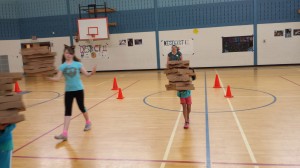 We also played a game called Watusi which is similar to dodgeball but with a few little twists. There is a jail that you have to go to on the other side if you get out and you can only be freed if somebody on your team knocks a large ball off a pole. Also, not only can you earn a point from knocking everyone on the other team out but you can also earn one by knocking down a pin that is placed on the other side. We felt it tied in perfectly to the Hunger Games because of all the balls located at the center of the court. It perfectly represented the cornucopia where everyone could gather supplies in the story.

It turned out to be such an amazing day! Not only did we have a ton of fun but we were also able to help out the community by donating food! We really enjoyed brainstorming for the event and Mrs. Lynch did such an amazing job of pulling everything together for the first ever “Stop Hunger Games!”

Do you have field day at your school?

What is your favorite book series?

Do you do anything at your school to help our your community?