To the Beat of the Drum

Today we were lucky enough to have the Bamidele Dancers and Drummers come visit us. They are a group composed of musicians and dancers from Africa, the Caribbean, and the United States that travel around to share the music of the African culture. 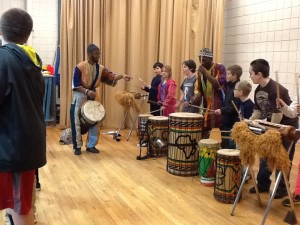 At the beginning we were introduced to the members. We got to meet Marilyn who is from the United States but has studied African and Caribbean cultures to better understand the music and the people behind the music. She now knows it so well that she teaches it to others at college. We also got to meet Sekou who is from Guinea, West Africa. He was a master dancer there before moving here to Massachusetts. He told us all about his native language which is called Sou Sou. We learned that to say “yes” you would say “eeo.” We got to answer “eeo” to a lot of questions by throwing our hands in the air and saying it. 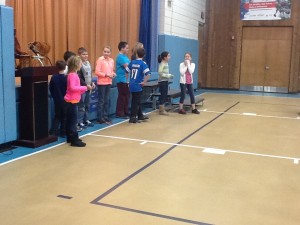 From the beginning they got all of us involved. Quite a few students were called up throughout the course of the assembly to take part in singing and dancing with the performers. At the end of the show they even called up all the teachers to dance! We have to say, Mr. Avery’s dance skills are not quite on par with his blogging skills (don’t tell him though)! 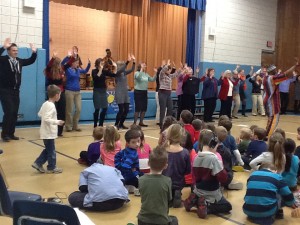 We have a quick video for you so that you can see some of the students dancing along with some of the instruments that the Bamidele group brought along.

Have you ever seen a show like this before?

What’s your favorite performance you’ve ever seen at your school?