We’ve recently been learning all about the layers of Earth. We’ve talked a bit about the theory of plate tectonics and how most earthquakes usually happen along fault boundaries, the place where two tectonic plates meet. Just as we were wrapping up our unit, something strange happened, well, something strange for where we live. Some of us felt an earthquake!

You may have recently read that there was an earthquake that happened in Maine. Well, the earthquake could be felt as far away as Connecticut. Some of us even felt it! Even though it wasn’t very strong, some of us felt the ground shaking beneath our feet. It was definitely an odd feeling!

So how is it possible that even though we don’t live along plate boundaries, we still had an earthquake? Well, sometimes they have something called an intraplate earthquake. It’s an earthquake that happens away from a plate boundary/fault. Scientists aren’t exactly sure about the reasons for these earthquakes. They think that they are areas of weakness from where prehistoric faults existed. Because of that, not only is it impossible to tell when an intraplate earthquake will happen but also where it will occur. Click here to learn more about the earthquake that happened in Maine or here to learn more about why earthquakes can occur in New England.

Contrary to popular belief though, earthquakes happen in New England much more often than people think. Take a look at the image below and see all the earthquakes that have happened here between 1924 and 1974 and then between 1975 and 2006. 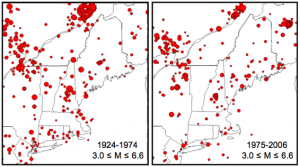 You can also check out a video of a meeting that was taking place near the epicenter (where the earthquake originated from) at the time of the earthquake.

While learning about plate tectonics and how most earthquakes occur along plate boundaries, students explored the USGS real-time earthquake map. They had to find 20 earthquakes that were at least a 3.0 magnitude or larger. Then, based upon each one, they had to find the coordinates for it and what the magnitude was. They kept track of this on a piece of paper. After, using Google Maps, they created a map that displayed the location of each of those earthquakes. After, we talked about why these earthquakes most likely occurred where they did.

Check out a few of our maps that we created below. You can click on each of the pins to learn a little bit more about each earthquake.

Map by Nicki, Ashley, and Kaylee


You can view the rest by clicking here.

Have you ever felt an earthquake before? If so, tell us about it!

Do you live in a place that has earthquakes frequently?