So today we took a field trip to Yellowstone National Park. Ok, well, maybe not exactly. That would be quite a long trip to head out to Idaho, Wyoming, and Montana. So instead, we had a park ranger come to us, through Skype. 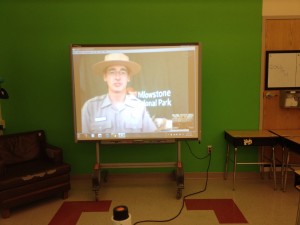 Mike Coonan was kind enough to take some time to talk to us as we begin to learn all about Earth. He chatted with us and answered some questions about earthquakes, volcanoes, and geysers. 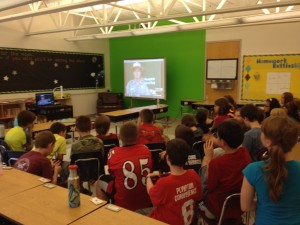 We learned so many amazing facts. As we’ve been talking about tectonic plates and fault lines, we learned that there are 3 fault lines that lie right underneath Yellowstone. They average close to 1,000 earthquakes a year. That’s almost 3 a day, except you can’t feel most of them. Sometimes they’ll have a whole bunch of earthquakes really close to each other which they call a “swarm” of earthquakes, just like a swarm of bees. Usually this makes scientists pay really close attention because underneath Yellowstone is a “super volcano.” It’s called this because the caldera, the top of the volcano is almost 30 miles across! The last time it erupted, 640,000 years ago, the ash fell as far away as Iowa and created something called a “nuclear winter.” It most likely killed most of the plants and many animals in the area because the sunlight wouldn’t have been able to pass through the ash which would’ve created temperatures much lower than normal.

Beyond the earthquakes and volcanoes, we also learned all about geysers. Geysers are plumes of steam and water that get heated from magma chambers underneath the earth. The most famous is “Old Faithful” because it goes off about every 89 minutes. When it goes off, the water can shoot almost 140 feet in the air! The reason is because there is almost 3,000 gallons of water trying to fit through a hole about the size of your fist! Imagine it like when you put a finger over a garden hose. You get a lot more pressure when you do so the water can go farther. 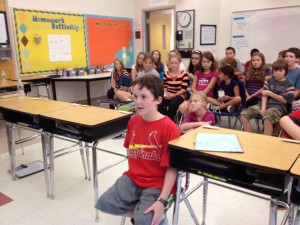 You can check out recent earthquakes at Yellowstone by clicking here.


If you get the opportunity, we highly recommend you take the time to Skype with a Yellowstone park ranger as well. You can visit the park without the expensive airfare!

Have you ever visited Yellowstone National Park?

Have you ever seen a volcano or felt an earthquake?