Several weeks ago, the classes voted on a topic for the story.  The topic with the most votes was “An underground tunnel is found below the school.  It takes you to…”

Classes have been taking turns adding to the story.  So far, Mr. Salsich’s class, Mrs. Yollis’ class, and B4 have written their parts of the story.

As they were about to eat the cotton candy, they heard muffled noises that sounded close by.  “Max, what was that?” Tiffany exclaimed.“I don’t know. Let’s go investigate,” Max replied.  As Tiffany was about to say, “No, I don’t think we should,” Max was already walking towards the noise.  When Max took his first step, the stone beneath his foot slowly began to sink into the ground.  The dust and dirt around the stone began to retreat towards the newly formed hole.“Max, what did you do?” Tiffany yelled!  Suddenly, the whole ground started to violently shake.  The torches on the walls began to flicker as the flames danced between life and death.   From the corner of her eye, Tiffany saw a rock suddenly starting to move on the wall.  “Max, what is going on? I don’t like this at all.  Let’s get out of here!”“We can’t leave Tiffany. Don’t you remember that the secret door closed behind us.  The only way for us to get out of here is to keep moving forward.  We need to go see what that is.”By this point, the rock had completely rotated out of the way, revealing a small, wooden chest.  As Max inched forward towards it, Tiffany shoved him out of the way.  “Fine, if this is what we have to do, let’s just get it over with.”  She reached forward, lifting the cover.  The insides of the chest were covered with ruby red felt.  Sitting in the center of the chest was what looked like a piece of paper.  She picked it up gently.  “What does it say?” Max asked excitedly. 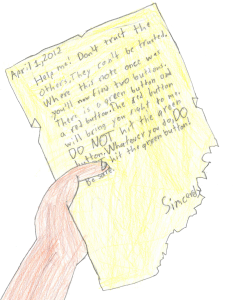 Max glanced over at the chest.  “There are the two buttons that the note talked about.  You heard what it said.  We need to hit the red one.”

Tiffany responded, “I don’t like that idea.  There’s no name.  We have no idea who wrote this note.  And look at the date.  It was written on April Fools’ Day!  For all we know, they could be trying to trick us!  Besides, the red button is always the bad one!”

Before Max could say another word, Tiffany was pushing in the green button.  The floor opened beneath her feet and Tiffany disappeared into the darkness.  The floor suddenly closed back up showing no signs that there was ever a trapdoor there. 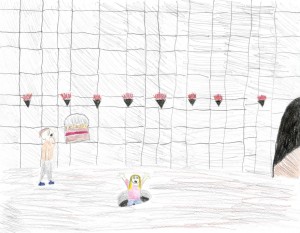 “Nooo!  Tiffany, where’d you go?” Max yelled.  There was no response.
Max couldn’t believe what he had just seen.  His friend was suddenly gone.  He had no idea where she was.  While the rest of the students were probably sitting in class learning about multiplication, here he was under the school with no idea where Tiffany had gone.  He wanted to find her so badly but he couldn’t take the chance of what could happen to him if he hit the green button too.  He knew he had to follow the note and hit the red button.  “Here goes nothing” Max thought to himself.  He closed his eyes and reached out for the red button.  As his hand reached it, it felt cold.  He could feel it pushing in as he applied more pressure to it.  As he finally pressed it in as far is it could go, he heard a noise coming from near where the floor opened and swallowed Tiffany.  “Oh no,” Max thought as he prepared himself for a fall.  However, his feet were still on solid ground.  He opened his eyes to find that a new door had opened in the floor showing a solid stone staircase. 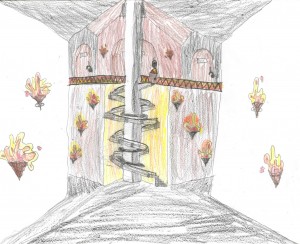 Max knew he would have to descend the spiral staircase

Max knew he had to push forward.  He began to descend down the spiral staircase.  Every step he took was illuminated by the torches on the walls.  He suddenly came to a halt.  That same muffled noise that he heard earlier with Tiffany was now audible again.  For the first time, Max could feel chills running up and down his spine.  The hairs on the back of his neck were standing on end.  He was brave before when he had Tiffany with him.  Now he was all alone.  He didn’t want to continue anymore, but he had to find Tiffany.

He continued on, this time much more slowly and more cautiously.  When he reached the bottom of the stairs, he encountered a door.  It was old and wooden.  Spiders crawled through their webs in the corners of the door.  One dropped from a single thread down towards the ground.  In the center of the door was a faded rectangle, with a slightly different color than the rest of the door.  It looked like there had once been something there.  Suddenly, Max felt something on his leg.  He looked down to see a spider crawling up it.  He shook his leg and the spider flew off and landed on something golden.  Max noticed that whatever was laying there was the same size as the faded mark on the door.  He carefully reached around the spider to pick it up.  It turned out it was a nameplate.  Max dusted it off and he could see the name Dr. Drakken sprawled across it.  As he reached for the rusty, brass doorknob, he quietly said to himself, “let’s hope Tiffany’s in there.” 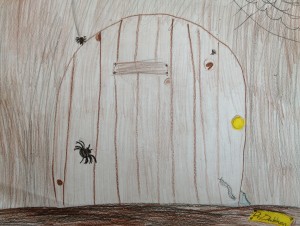 Max had to shield his eyes as he had to try to adjust to the sudden bright light of this new room.  All he could smell around him was an awful concoction of must, moth balls, sulfur and gasoline.  As his eyes began to adjust to the light, the room began to come into focus.  He could see machinery all around him, including one giant piece of equipment in the center of the room.  There were cylinders, beakers, and test tubes of liquids of almost every color imaginable scattered throughout the room.  As he continued looking around, that’s when he heard it, the muffled cries that he had heard earlier.  This time it was even louder though.  Max moved towards the sound.  He rounded the machine in the middle of the room.  That’s when he saw her!  Tiffany was there except she was tied up in a chair back-to-back with a man Max had never seen before.  He was mostly bald with only tufts of fluffy white hair coming off the sides of his head.  He wore a dirty, tattered lab coat that made him look like he had been down here for years. 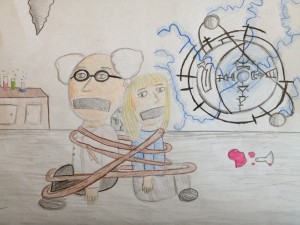 Tiffany is found tied up with Dr. Drakken

Max ran over to untie Tiffany.  He pulled the tape off of her mouth.  “Max, I’m so glad you found me!  Benjamin Franklin grabbed me and brought me in here when I fell through the floor.”  He finished untying her.  She stood and stretched out her legs.

“Who is that?” Max asked Tiffany.

“I have no idea.  He was in here when I was brought in.  Do you think we should untie him?” Tiffany replied.

“Let’s just take the tape off and see what he has to say,” Max answered.

“Who are you?” Tiffany asked.

“I’m Dr. Drakken.  I’ve been working down here for decades perfecting my time machine.  I’ve been working with the different departments at the school.  I wanted to bring back Benjamin Franklin to give a speech to a history class.  I tried bringing back a prehistoric snake for a science class.  I’ve tried bringing back so many different things.  However, something went terribly wrong.  My machine just doesn’t seem to be right as it’s changed them all in some way!  Benjamin Franklin went from being the nicest man I’ve ever met and when I got him back here he was totally different.  When the snake got back here it had two heads and could talk.  I don’t know what I’ve done!” 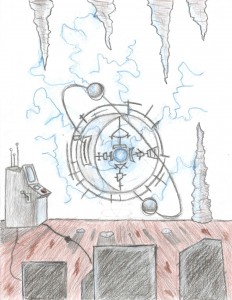 Dr. Drakken's time machine in the center of the room

“I wish you could,” Dr. Drakken replied.  “I just need my special cotton candy I invented.  I misplaced it and now have no idea where it is.”

Tiffany reached into her pocket and to her amazement, the small bag was still there.  She pulled it out and asked, “You mean this?”

What parts of the story could you visualize best?
What do you think could happen next?