Recently we’ve been learning all about integers. Integers are any whole number but can be positive, negative or zero. For example, -30, 4, 0, -7 and 182 are all integers. 3.82, 1/4, .5, and 7/4 are not. Those are considered to be rational numbers which are any number that can be turned into a fraction with integers as the numerator and denominator.

In the past we’ve done plenty with addition and subtraction. We’ve added and subtracted decimals, percents, and fractions this year. Most recently we learned how to add and subtract integers. Integers can be tricky because you can end up with both positive and negative numbers in a problem. However, we took a look at how to use number lines to help us solve the problems as you’ll be able to see in the videos we created.

After using number lines to understand the concept behind adding and subtracting integers, we took a look at other ways to solve the problems. We started with adding integers. Adding two negative numbers is very easy. We learned that to find the answer, you just add the two numbers and make the number a negative. For example – 3 + -5 = -8 because you’re going back 3 and then going back another 5 which puts you at -8 on a number line. If you have one positive number and one negative number, there are a few more steps involved. 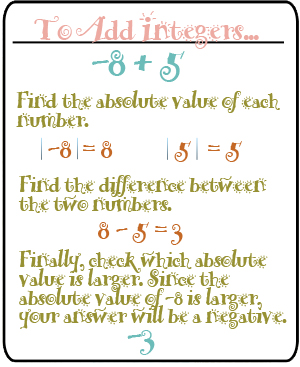 After we discovered how to add integers, we took on subtracting integers. We learned that a subtraction sign can almost be looked at as the opposite of. For example, if you take away four of something it’s the same as the opposite of having four. We used this idea in helping to figure out problems dealing with subtracting positive and negative numbers. 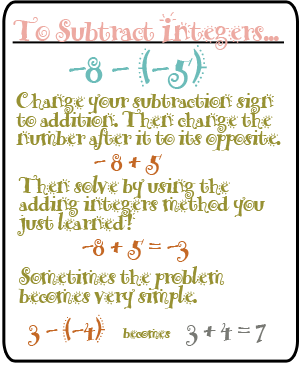 Of course, some of newscasters from the Math Movie Network can probably explain it even better. Take a look at the videos below to learn a little bit more about adding and subtracting integers!


As always, an amazing job by our Math Movie Network hosts! Can’t wait to see what else you have in store this year!


Which way do you prefer to solve problems with integers?

Where are some different places that you may find negative numbers?