The Edublog Awards were held last week, highlighting some of the best blogs, websites, and tools in education. We were lucky enough to be nominated in three different categories! We were shortlisted for Best Class Blog, Best Use of Audio/Video/Podcast, and Best Educational Wiki (for Student Made Math Movies).

The award ceremony was hosted online which was great because people from around the world were able to be there at the same time. Many of our friends such as Mrs. Yollis, 2KM/2KJ, Mr. Salsich, Mrs. Watson, Mrs. McKenzie, and Mrs. Watson were all there. A few of our students, Will, Alyxandra, Kirstyn, and Ed even joined us to see if we won!

The hosts for the night, Ronnie Burt, Sue Waters, and Steve Hargadon went through the categories one by one. They showed a slide with the top five vote getters and then, the big announcement after, who won!

We didn’t make the top five for Best Class Blog or Best Educational Wiki. However, we were so glad to see Mrs. Yollis’ class win Best Class Blog and that Mr. Salsich’s class and 2KM/2KJ made the final five! We’re so proud of them for everything they’ve accomplished!

Time continued to go by as we waited for our last category. We saw Tech With Intention, a blog Mr. Avery was featured on win for Best New Blog. We saw Mrs. Hembree come in second in Best Library Blog. Our World, Our Stories, and amazing collaborative blog between many of our friends won Best Group Blog. Then, Mrs. Yollis won again for Most Influential Blog Post.

Finally, it was our time again. They mentioned that the next award would be for Best Use of Audio/Video/Podcast. We’ve put a lot of hard work into our videos this year so we thought we definitely had a chance to make the top five. They flipped the slide, and we were on there! We came in third place. Although we thought it would’ve been nice to win, we were ecstatic that we made the top five in any category!

Thank you to everyone for all your support and your votes. We’re going to always strive to get better so that next year we’ll hopefully earn even more votes! 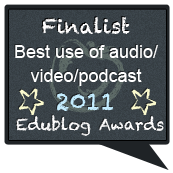 *Do you know anyone who won a category?*