Skyping Away – Twice in One Day

On Friday, we were lucky enough to be able to Skype twice in just one day! We started first thing in the morning by getting to Skype with a soldier who is over in Iraq. It just so happened that the soldier is Ariel and Jacquelyn’s uncle! Mrs. Reynold’s class came over to join us as we learned all about what life is like in a country in the Middle East. Then, we had an opportunity to Skype with Mr. Salsich’s class to share all about the kites that we were making as part of the Kites Around the World project!

To start our Skyping sessions, we made a call into Iraq. That’s where Ariel and Jacquelyn’s uncle is currently stationed. He shared all sorts of wonderful information with us. We learned that even though they’re in desert and we think that temperatures are always hot there, they can actually get quite cold as well. He’s experienced temperatures as low as 30° F. Of course, it still gets very hot there with temperatures as high as 130° F in the summer. That’s definitely quite the temperature difference! We also found out that there’s a part of the year where they get quite a bit of rain and it stays muddy for a really long time! Then, during the time of year when it’s dry, if it’s windy, it becomes very dusty and they sometimes have dust storms! Since he flies a helicopter, that makes it very difficult for him to see. It’s a good thing he’s a great pilot! Students had so many great questions and it was amazing to be able to talk to someone so far away! 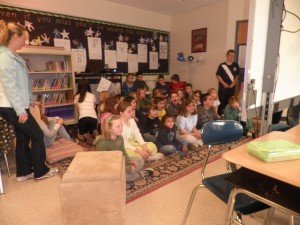 Getting ready to Skype! 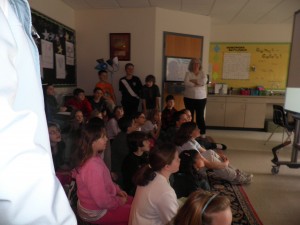 
Right after we finished our first Skype call, we dialed Mr. Salsich and his class in Connecticut. We are taking part in the Kites Around the World project that Mr. Salsich started. He created a wiki that contains all sorts of great information about creating a kite. It also gives classes from all over a world a place to share their results! Click here to visit it!

Every student in both classes had an opportunity to share their favorite part about making a kite. We learned that many students really enjoyed getting to design the kite. Others loved trying to figure out the measurements. At the time of Skyping, neither class had flown them yet but the students were all very excited about getting the chance to! 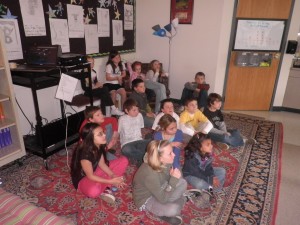 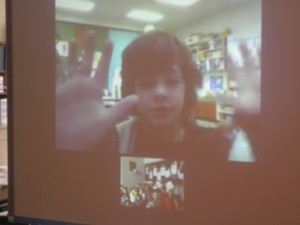 Hi to you too! 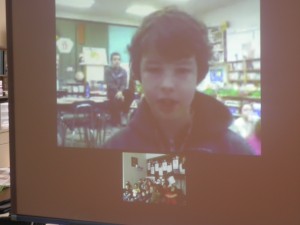 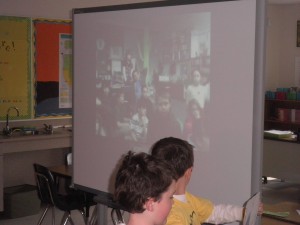 
*What did you learn from our two Skype conversations?*

*How are Iraq and Connecticut similar and different?*

*What is your favorite thing about Skyping?*